How Documentation of Human Rights Concerns Has Led to Policy Change 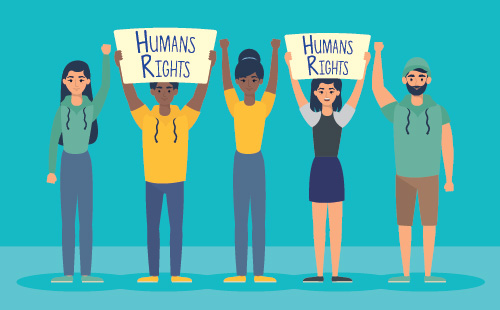 While the signing of this declaration in 1948  has encouraged and inspired many nations to take steps to ensure the protection of their people's basic human rights, the world continues to face human rights violations today. In the years since, treaty bodies such as the Committee Against Torture and the Convention on the Rights of the Child have been formed. Additionally, the  members of the United Nations have signed treaties such as the Civil and Political Rights Covenant and the Racial Discrimination Convention.

While efforts are still being made to achieve a society that honors human rights worldwide, the documentation of violations has led to impactful changes in policy. By recording and preserving these violations, as well as the world’s reactions to them, for future generations, progress continues toward the universal protection of human rights.

Understanding the Importance of Archives and Human Rights

Without this documentation, these organizations and others like them would be unable to gather the essential data to prove to citizens and governments that change is necessary.

Across the world, proper documentation of events through print and film media has played a massive role in steering policymakers toward change. There are many examples of this in history, with the Civil Rights Movement being among the earliest and most prominent.

As the Civil Rights Movement unfolded in the 1950s and 1960s, media coverage was extensive. In particular, Black radio stations covered events extensively, giving citizens across the country a front-row seat to protests, marches, and sermons. This media coverage helped drum up the support of Americans of all races, which put extreme pressure on the American government to implement policies that protected the civil rights of all races. Events that took place during this time included a unanimous ruling in the Brown v. Board of Education case, which ruled that racial segregation in schools was unconstitutional, and the Civil Rights Act of 1964, which outlawed segregation based on race, color, religion. or sex in all public spaces.

In Australia, the Indigenous population suffered from segregation by British settlers and their descendants. Indigenous Australians lacked voting rights until as late as 1965 and cultural assimilation via the forcible removal of children from their families continued until late in the 20th century. In what would become a defining moment in Australian activism, students from the University of Sydney began a 15-day bus journey throughout New South Wales. Dubbed the Freedom Ride, it drew global attention on the treatment of Indigenous Australians. It wasn’t until 1984, with the adoption of the Commonwealth Electoral Amendment Act 1983, that Indigenous Australians gained full voting equality.

In the aftermath of World War Two, governments around the globe began to express a desire for universal human rights. In 1966, the International Bill of Rights was adopted by the General Assembly of the UN, forcing governments worldwide to comply and protect the rights of their citizens. In 1969, while Apartheid was at its height in South Africa and the Civil Rights Movement of the United States was in full swing, the 156 countries signed the International Convention on the Elimination of All Forms of Racial Discrimination, a document that promised a global effort to end racism and apartheid.

Without proper documentation of these events and others around the world, the pressure on governments to put better policies in place to protect their citizens would cease to exist.

How To Preserve These Records for the Future

There are multiple tools and techniques available to preserve the past, but digitizing documents is the best method of ensuring the integrity of historical information. The use of microfilm scanners is an option available to those who want to record and safely store historical documents, such as letters and pictures. Using a high-performance camera and image sensor, they scan microfilms and convert them to pdf or tiff files. These files can safely be preserved for as long as they exist.

Historical events like the genocide of Armenian Christians in the Ottoman Empire and the murder of George Floyd mark pivotal moments that transformed the way society works. Preserving the accuracy of these events through documentation is key to ensuring positive changes continue to occur in the United States and across the globe. When it comes to safely preserving the documentation needed to recall these events accurately years, decades, or even centuries in the future, digitization and secure storage are key.

With well-documented accounts of human rights violations, activists and citizens can drive change in policies and regulations within their own countries. However, the accuracy of this documentation is key, which means finding a reliable and safe method for preservation is vital.

ScanPro 500 series microfilm scanners help legal organizations and charities that work directly in the human rights space to ensure the safe preservation of important artifacts and documents. To preserve your important documents, invest in the ScanPro® 500 Series Microfilm Scanner today.