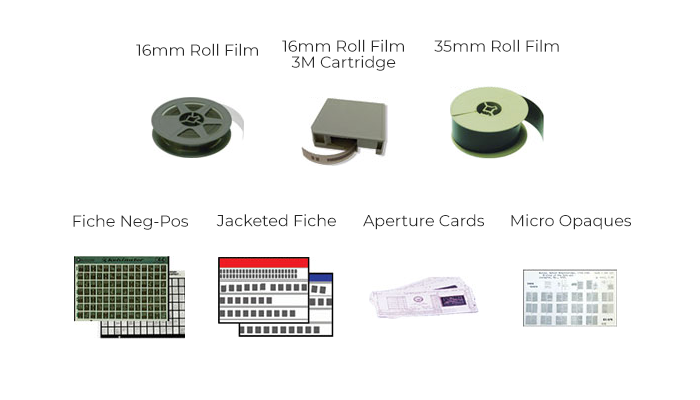 Archivists across all sectors have been using microforms since the 1920s after a New York City banker patented a device that would make permanent copies of bank records. In the mid-1930s, Eastman Kodak bought the invention for their Recordak system. After Recordak filmed and published the New York Times on microfilm using a 35mm camera, microfilm use began to increase drastically. Microforms (microfilm and microfiche) quickly gained popularity with institutions as microforms preserved their records and saved storage space. Microfilm popularity continued to grow through the 1950s and 60s as libraries allowed their patrons to view documents with specialized film readers that magnified the small images. Even today, many archival institutions continue to grow and preserve their microfilm collections. Since their patenting in the 1920s, many different types of microform storage have become standard in the archiving profession.

The first microform type that can be found in collections is microfilms. Microfilm is a roll or spool of film with sequential frames of images. These film reels look similar to rolls of movie films. Microfilm rolls come in two standard sizes: 16mm and 35mm. The images in these rolls can be master copies, duplicates, positives, or negatives.

Proper storage of microfilms is a necessity to protect the collection. If the cellulose nitrate-based film is not stored properly, it will become flammable and pyrophoric. Additionally, improper storage of acetate film leads to quick deterioration which emits a noticeable vinegar smell.

This film is used for storing images of A3 and A4 paper-size documents. These documents often include records such as building permits, financial, or medical charts. 16mm film can be found in various collecting bodies like government offices, insurance companies, or museums. A single roll of 16mm film can hold 2,400 images of letter-sized documents.

This roll film size is typically used for oversized documents such as newspapers, building plans, and engineering diagrams or drawings. 35mm roll film is preferable to 16mm when archiving older, delicate documents. The 35mm roll can capture images at a higher resolution due to a lesser reduction ratio. A single roll of 35mm film can hold up to 800 broadsheet newspaper pages or 600 building plans.

These cartridges consist of 16mm roll film inside a square, hard plastic case. They are self-threading, and when in use, the fill from a cartridge will be wound on a separate spool.M-type cartridges are the same as a standard roll of 16mm roll film in the size and types of images stored on them. 16mm Roll Film 3M cartridges will often require a special adapter to load on a reading or scanning device.

The second type of microform is microfiche. Microfiche are small (10-by-15-cm) flat sheets of plastic with a series of microimages in a grid-like shape. A standard sheet can store between 60 to 100 images. There is usually a “title strip” with information and details related to the image on each sheet or card.

Microfiche has a polarity that is based on the color of the film’s image and the background color. Microfiche with a positive polarity will show black images or figures on a transparent or white background, while microfiche with a negative polarity will show white or transparent images on a black background. Each image will have both a positive and a negative fiche copy that can be used to view the images. Negative microfiche has less contrast than positive fiche. Through digitization and editing, a negative fiche image can be made more precise.

Jacketed fiche are made of cut strips of either 16mm or 35mm film. The film strips are placed into a clear Mylar envelope or jacket, which helps stabilize and preserve them.Typically, these jackets are larger than a standard index card at 4 inches tall and 6 inches wide and hold the film horizontally. 16mm jackets can hold five to six strips of film, whereas a 35mm jacket can hold two strips of film. The film can be removed, updated, changed, and duplicated. Jacketed fiches have been used to store medical patient records.

Micro-opaques, also known as micro-cards or micro-prints, are no longer produced but can still be found in many libraries’ archival collections. The images on micro-opaques are arranged in a grid-like pattern printed on photographic paper or cardstock rather than film. The images are reduced in size and could contain forty images per 3-by-5-inch card. Micro-opaques are stored in sleeves or boxes and require specialized equipment to print and read the cards.

Aperture cards are pieces of cardstock that have a single frame of 35mm film mounted into an aperture hole. There are two general formats for aperture cards: Hollerith and Standard. Hollerith aperture cards are similar to the old IBM punch cards. The punch card part uses multiple holes to identify the data in the card’s image. These holes also allow the cards to be mechanically stored. Unlike their counterpart, Standard aperture cards do not have hole punches. The indexing information for each card will be either on the top of the card or the card must be scanned to gather the data. Aperture cards were once widely used in the architectural and engineering industries to preserve maps, blueprints, and drawings. These cards need to use specific scanners and printers that have been designed for aperture cards.

Each type of microform usually requires a specific reader or scanner to view the images. If an institution does not have the proper equipment or if the scanner is broken, then archivists are unable to read, digitize, or access the content of the film. e-ImageData’s ScanPro All-In-One line was created to solve this issue. With three models to choose from, institutions can archive and digitize a variety of records, regardless of the type of microform used. These scanners are faster than ribbon scanning and produce consistent and reliable images, even after years of use.